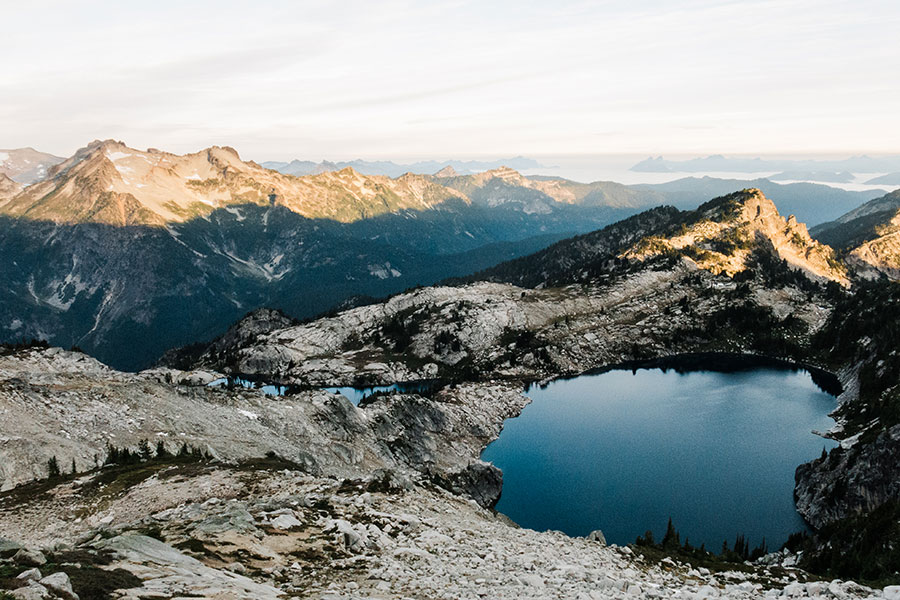 I’m not sure what it was, but at 23 weeks pregnant I decided it would be a good idea to backpack deep into the wilderness to Tuck and Robin Lakes. Maybe I was just trying to fit in as many adventures as I could before the baby comes but this trail is definitely not for the faint of heart! The end goal was Robin Lakes, with a snack stop at Tuck along the way. The trail seems so innocent at first. The trailhead is for Deception Pass, a hike I’ve done a few times before in the Salmon La Sac area. The first four miles of this trail are seriously easy. It’s like walking on a sidewalk! I kept wondering when we would start to gain the 2900 feet of elevation.

Getting to Tuck Lake wasn’t really an issue, although we had started climbing at that point. It was a lovely day and we took the opportunity to stop for a lunch break and admire the sparkling waters. After that, the real adventure began. The trail to Robin Lakes is sort of a “choose your own adventure” style hike, with several routes available. I later learned that the trail is “user-made” and while it has been adopted by the forest service, isn’t very well maintained. There were many spots where I was using both my hands and feet, and had to complete lots of weird little scrambling maneuvers. This may have been alright if I wasn’t pregnant, but alas, I was and this was the adventure I had embarked on!

Seeing Robin Lakes for the first time was the biggest relief. The lakes are gorgeous – two little sparkling gems surrounded by granite rock. It was a lovely scene to see after so much hard work! We were there early enough to find a good camping site and met our friends who had arrived the day before. From there we enjoyed a little fishing, sunbathing, cliff-jumping and backcountry cooking. Overall it was a pretty peaceful evening, despite the fact that I really wasn’t enjoying sleeping on the ground while pregnant.

The next morning, David and our friend Evan woke up early to scramble nearby Granite Mountain. I was pretty sad to miss this opportunity, but perhaps I’ll get to return someday while not pregnant! The sunrise they enjoyed was absolutely stunning, with views for miles. Below you’ll see a few of the shots that David and Evan got from the summit.

Sadly it was time to return home that day and we endured a knee-jarring descent to the car. Of course a stop at The Brick in Roslyn was made for burgers and other tasty bar food. I highly recommend Tuck and Robin Lakes as an overnight. There’s so much to explore and it’s relatively crowded for as difficult as it is! Be prepared for the adventure and one crazy beautiful set of alpine lakes! If you want to learn more about this hike, check out the trail report on Washington Trails Association!